Nathmandir in the city, Paithan

This is the temple of Shri Eknath Maharaj and the main idol is of Shri Vijayi Panduranga. There are idols of many deities including the idol of the Ekvira Devi, the Kulswamini of Eknath. The Padukas of Eknath Maharaj that are carried during the Ashadi Wari are also placed here.

The Ranjan (pot) in which Shrikhandya poured the water, the Sahan (sandalwood) on which the sandalwood was rubbed, the Uddhava Khamb in which Shrikhandya disappeared is also here. The Purankhamba (pillar) by which Nath Maharaj used sit to preach is also here. The place where Lord Dattatreya stood and performed duties of the chopadar (watchman) is also shown here. All the three Dindyas of Eknathshathi festival leave from this place. Similarly, Ashadi Palkhi ceremony also starts from this place. At this place, Mahapuja (Abhishek) is performed on every Ekadashi. The festival of Gokul Astami (Krishna Janmastami) is widely celebrated here. Similarly, other traditional, occasional festivals are also celebrated here. There are houses of the descendants of Nath in the temple area.. 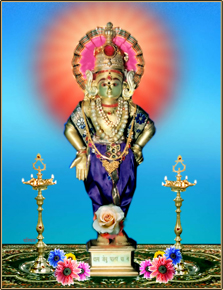