ShriEknathshashti is celebrated as the Shri Eknathmaharaj Jalasamadhi Din in Maharashtra and outside the Maharashtra. Especially in Paithan, six to seven lakh devotees attend this ceremony. The Wari of the Nathshasthi is the second greatest Wari of the Warkari cult. After the Ashadhi Wari of Pandharpur, the Warkaris in big number gather for this Wari. From different places around 475 Dindies do come with chanting “Bhanudas-Eknath” and because of this the area experiences the jubilant spirit.

This festival is celebrated on the Falgun Vady Shasti, Saptami and Asthmi (around in the month of March). On Dwitiya, the Pooja of the Ranjan (the Pot) begins in the Nathmandir of the town. From Dwitiya to Panchami, the Parayana (recitation) of Nath Charitra written by Shri Keshavswami is scheduled. On the day of Panchami, the dignitaries are invited to the festival. 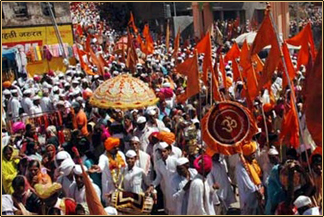 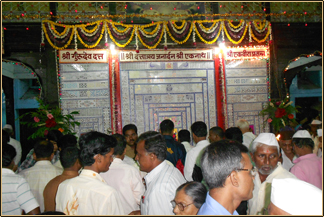 Shasthi- Mahabhishek is performed on the idol of Srivijayi Panduranga at 2 am on the sixth day. The first Dindi (procession) of the descendants of Nath (Nath dynasty) departs around at 12.00 noon from the Temple of the town to ShriEknathmaharaj Samadhi temple. Warkari and Haridasi kirtans are performed in the temple on behalf of the Nath dynasty. After returning to the temple of the town Aarti is performed. The Dindyas that come for the ceremony do undertake the Nagar Pradikshana ( go around to the town) and rest at the bank of the Goda River or at the respective monasteries

Saptami: On the seventh day, at 12 o'clock in the night, a procession of the Padukas of Nath is taken out from the village. That is known as Chabina. When the Palakhi arrives in the Walwant (Desert) around dawn, Padukas are bathed in the River Goda, Bharuds are presented. Around 7.00 am the Palakhi arrives in the temple of the town. Bhajan and Kirtans are organized in the (groups) of the Warkari. Crowds of Devotees do gather to listen to kirtan in the desert. 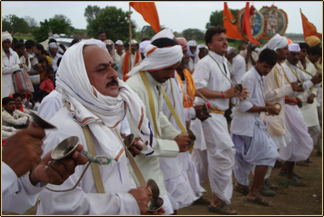 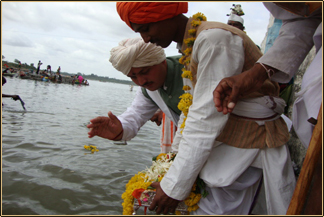 Asthami: On the day of Ashtami, around 4 pm, Kala Dindi leaves from the Nath Mandir. At the steps of the Udasin Matha pavalya (steps) are played. A community of thousands is present to capture/witness this scene. After reaching the Samadhi temple, hundreds of devotees get engrossed in playing the steps (pavalya) with the Talmrudunga on the ground in front of the temple. Very big laddu of jaggery and Lahya are attractively placed high next to the temple. 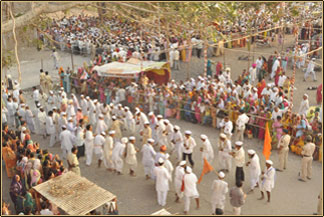 In the centre of it hangs a pot full of Kala. At sunset, in the chanting of 'Dattatraya Janardan Shri Eknath', the pot is broken by the descendants of the Nath with the help of a stick. Devotees flock to get prasad. After the Abhang, Gaulani and Aarti of the tradition, kala (prasad) is distributed in the desert of Godavari. During these three days, thousands of Warakaris of the Phada of the Shri Eknath Maharaj Paithankar participate in Dindi. Besides, other devotees also enjoy the ceremony in their own way. At present the number of devotees coming for the ceremony at Paithan is increasing day by day and the number of devotees coming from Marathwada, Western Maharashtra, Vidarbha, Khandesh etc. is increasing. Like this, the devotees from Kokan, Mumbai, Karnatak and other places are willing to come in Didis. Thus, there is a new influx (arrival) of Warakaris here. The Nathashthi festival has also become a subject of attraction for foreigners and many foreign tourists come to Paithan to witness the festival. 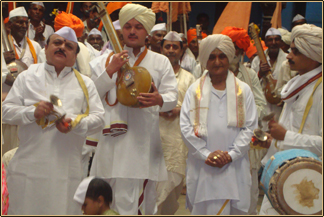 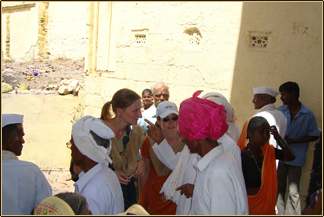 History of the festival - As five incidents took place on Fa. V. 06 , they are called Panchparvashreni. Nath himself used to celebrate this day as the birthday and death anniversary of his Guru. Later, Natha also took Jalasamadhi on the same day and thus, this day is being celebrated as Shri Eknath Shasthi